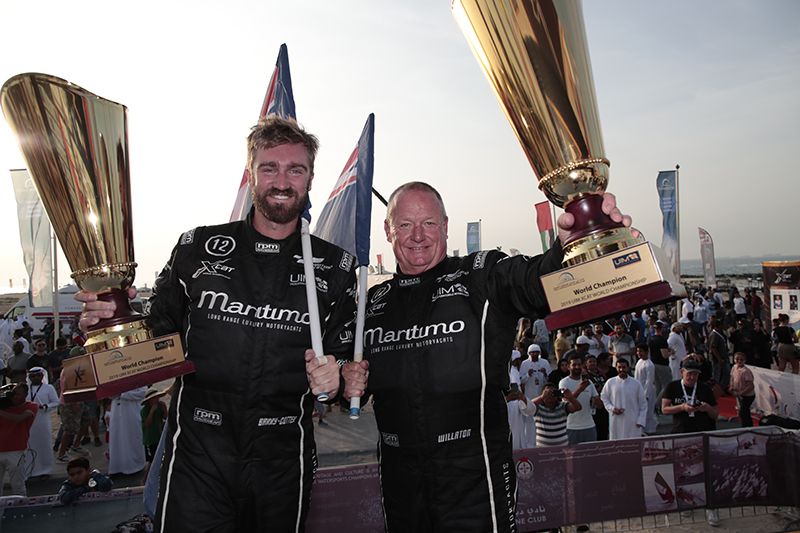 Dubai, 14 December. Team Maritimo of Australia, with the Aussies Tom Barry-Cotter and Ross Willaton, on a Maritimo boat built in Australia, win the 2019 UIM XCAT World Championship. That should be enough for a line to describe the proud that they have felt down under, and in particular in the Gold Coast, after today's race. But even more so here, where the Oz flag has been waved from the top spot of the podium by the two drivers.

In a well-balanced fight during the whole season, with four boats eligible for the world title until the very last race, it's not been easy for the Maritimo duo to be the best.

The pole of race 2 was for Abu Dhabi 4 of Shaun Torrente and Faleh al Mansoori, leaders of the overall ranking, so they seemed the favorite. Behind them, Maritimo, Abu Dhabi 5 and Dubai Police.
Maritimo had to get 4 points more than Abu Dhabi 4, but the start went smooth and they all kept positions. The latter also increase their advantage of having clear water in front, while the former chase them crossing their wake from side to side in a desperate attempt to close the gap. But - out of thin air - the leaders miss a buoy and get a penalty long lap! Torrente and Al Mansoori immediately take it and find themselves behind. Where Dubai Police is trying to play a perfect strategy and overtake Abu Dhabi 5, in a desperate attempt to get in front and run away with the bone (the world title) while the other two (Maritimo and Abu Dhabi 4) fight for it.
But Barry-Cotter and Willaton are in front, they are fully concentrated, and their boat is amazingly fast: they pile up seconds after seconds of advantage until they feel safe. At lap 13 they still have the second long lap to take, and Abu Dhabi 5 now in P2 has a chance. But no, Maritimo is too much ahead, and there's nothing to do.
After the penalty Abu Dhabi 4 is fourth but very close to Dubai Police, so here's another fight, as Arif al Zaffein and Nadir bin Hendi are not fast as usual. The gap gets thinner and thinner, but.. the checkered flag waves and the season is over.

Maritimo turns the prevision around and wins the 2019 UIM XCAT World Championship, while Abu Dhabi 4 is only second and Dubai Police third by two points.

Behind the top four, once again is 222 Offshore with the Italian Giovanni Carpitella and the Australian Daren Nicholson, also fifth in the overall, then HPI Racing Team (Giuseppe and Rosario Schiano), Victory Team (Salem al Adidi and Eisa al Ali), Kuwait (Abdullatef al Omani and Moustafa al Dashti), De Mitri (Roberto Lo Piano and Maurizio Carando), Videx (Alfredo Amato and Saul Bubacco), Consulbrokers (Andrea Comello and Joakim Kumlin).
DNF for New Star Racing, Mikhail Kitashev and Dmitry Vandishev, who almost made a miracle after the flip over in race 1: a huge effort by the team and a fair help from their opponents took them in the water, but unfortunately for less than a lap.
A due mention also to Swecat Racing (Erik Stark and Sebastian Groth), stopped in the dry pits after the big crash last November in Shanghai, and to Team Australia (Pål Virik Nilsen and Jan Trigve Braaten), with the confidence of seeing them back on track after Pål's recovery.

The Dubai Grand Prix, held at Sunset Beach with a view over the iconic Burj Khalifa and Burj Al Arab, has turned out perfectly. The joint work of UIM, World Powerboating Federation and Championship Promoters, and Dubai International Marine Club as the local organizers, put up a successful weekend with loads of spectators, sponsors, activities, and media attention. All crowned by the presence on the stage, for the prize-giving ceremony, of His Highness Sheikh Mansour bin Mohammed bin Rashid Al Maktoum, President of the Dubai International Marine Club, the Dubai Sports Council, and the UAE Sports Federation.

The teams and drivers raced a thrilling championship, the promoters and organizers made a huge effort to take the Championship to an ever-higher level, and all the staff worked hard for smooth operations. The basis for a great 2020 XCAT season are all there.