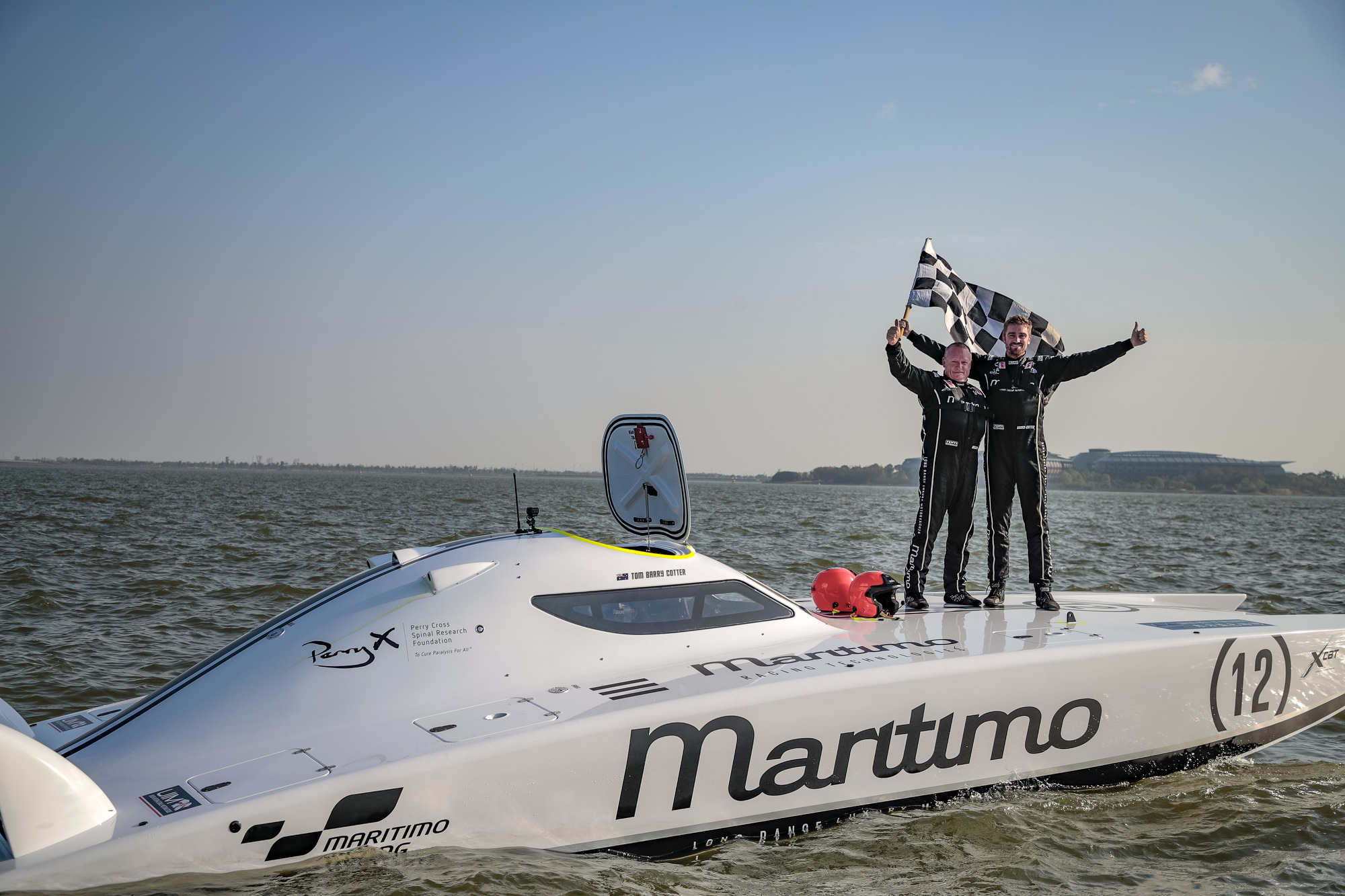 Maritimo wins race 2 of the Shanghai GP, the championship is a matter of (at least) three teams

With today's win in China the Australian team of Maritimo gain 35, very important points. A third place for Dubai Police and a penalty for Abu Dhabi 4 means that the three teams are all fighting for the 2019 title.

The long weekend of the Shanghai GP, stage 2 of the 2019 UIM XCAT World Championship, has pronounced today another virdict. And it says that this year's crown is (at least) a matter of three teams: Dubai Police (Arif al Zaffein and Nadir bin Hendi), Abu Dhabi 4 (Shaun Torrente and Faleh al Mansoori), Maritimo (Tom Barry Cotter and Ross Willaton).

It's Maritimo themselves to clinch the victory, with an amazing race won thanks to a perfect long-lap strategy and a hammer-like pace.
Starting in P2 behind Abu Dhabi 5 of Rashed al Tayer and Majeed al Mansoori (perfect pole position lap this morning for the Emirati crew), Barry Cotter and Willaton lose one position at the to Dubai Police but run a smooth and flawless race, taking their long laps in the right moments in order to have as much clear water as possible in front of them. This means having the chance of taking the best trajectories around the buoys, and pushing to the limit all the time.

When finally Maritimo and Abu Dhabi 5 end their long laps, with Dubai Police back to third spot for a problem with a trim, it's the Aussie team to be in the lead, with Al Tayer and Al Mansoori trailing by 5 seconds. No chance to overtake them anymore, given the speed of the Australian boat, so Tom Barry Cotter and Ross Willaton take their first win in XCAT since their comeback last year.

Dubai Police finishes third, same position they had on the grid, with the little disappointment of having lost P2 for a small technical issue. But Al Zaffein and Bin Hendi can celebrate anyway: as with this podium they jump to top of the overall ranking at 117 points.

Because, and that's the unexpected twist, Abu Dhabi 4 finishes in P6. Torrente and Al Mansoori didn't have the pace today, apparently for a problem with a coil which kept one cylinder dumb (no power to the spark plug means no combustion), but were able to maintain their fourth position thus the top spot in the championship.
But after the checkered flag the commissioners sanctioned them for missing a turning buoy during the race, dropping them down to sixth spot and to 12 points instead of 22. The final count says now 112 for the Amerian / UAE duo.

This penalty is good news for HPI Racing Team of the brothers Rosario and Giuseppe Schiano, and for Swecat with Erik Stark and Sebastian Groth, fourth and fifth respectively after a consistent race.

All the boats have finished today's competition, which is good news considering the incidents and issues happened in the last two days: the positions 7 to 12 go to Kuwait, 222 Offshore, De Mitri, New Star Racing, Videx and Consulbrokers. They all get points for the championship.

And the weekend is not over: Sunday at 12:30 local time (GMT +8) the green flag will wave again for race three of the Shanghai GP.